We’ve done several training classes with Nola over the past few years. We even tried agility with her, which she loved, until she tore her ACL. We decided after her CGC certification that we would do a class just for fun. We needed a class that wasn’t too physical, since the vet recommend she avoid jumping. We didn’t want to do another obedience class right away. And, we wanted to do something that was F-U-N for Nola Muffin. Since she seems to be a pro at sniffing out all the poop buried under the snow in our yard, finding chicken bones on the side of the road, and all digging up all sorts of gross things at the beach, we figured Nose Work seemed like the perfect fit! 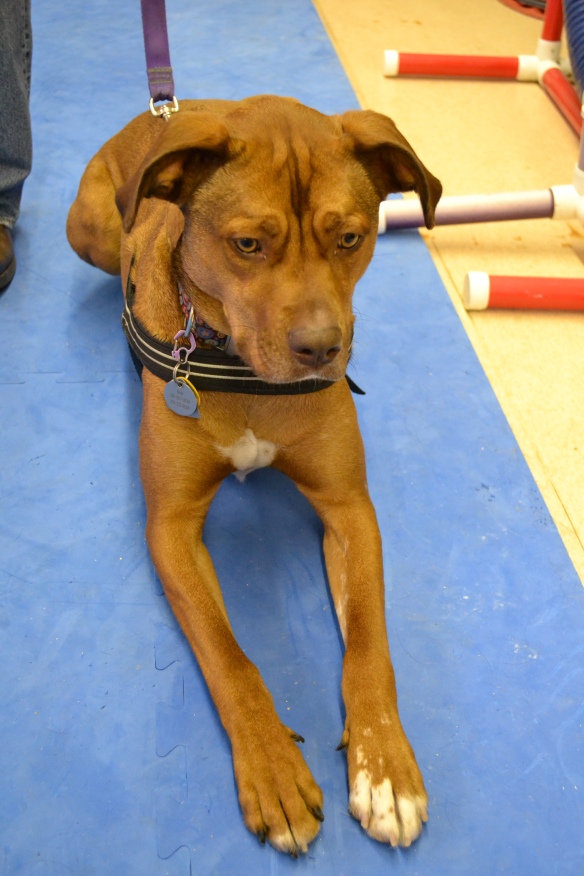 Nola getting psyched for class.

Last week was our first class. I find the first class of any training session to be a bit stressful, because I am a worrier and have anxiety about unknown situations, and this on proved to be no different. It had been recommended to us by Teri, the trainer, to bring a crate for Nola. Because the dogs work off leash it is important to keep the other dogs contained. Well, it’s been well over a year since Nola has even stepped foot in a crate. We worked on it a bit at home before class, but apparently not enough. She hated being in there and would only be calm if we were feeding her treats. Otherwise she was whining and pawing at the door. Look at the pathetic face she gave us: 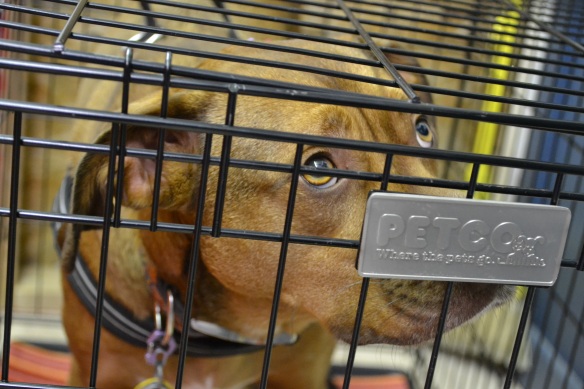 “Can I PLEASE come out now?” 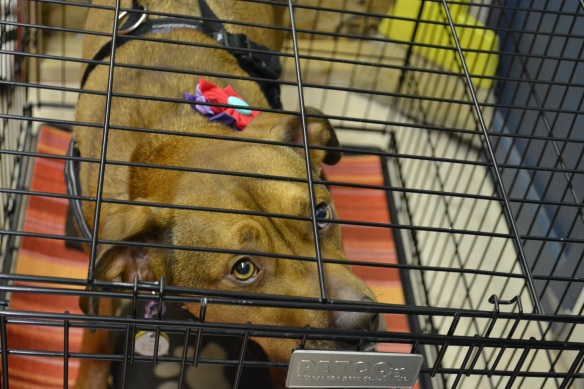 Next week we are going to try a bigger crate and see if that helps a bit. (This one was the smaller of the two we own, because it’s easier to transport, but she was hitting her head on the top.) We also tried just keeping her behind a partition, but she was too interested in what was going on, and she’s tall enough to see over it! 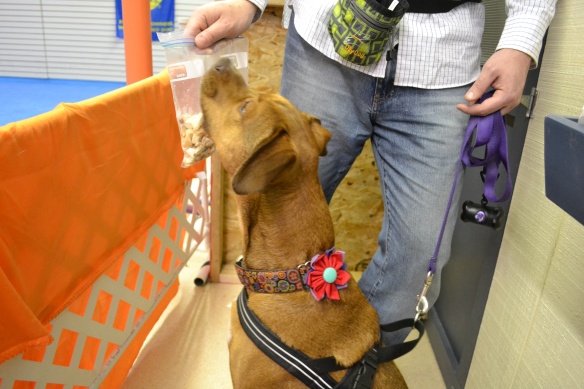 After we set up our holding area for Nola, the class begun. Each dog got to go three rounds, with three turns to sniff each round. During the first round Nola got to watch as Teri took the treat, put it in a box and placed it on the floor amongst just a few other boxes. 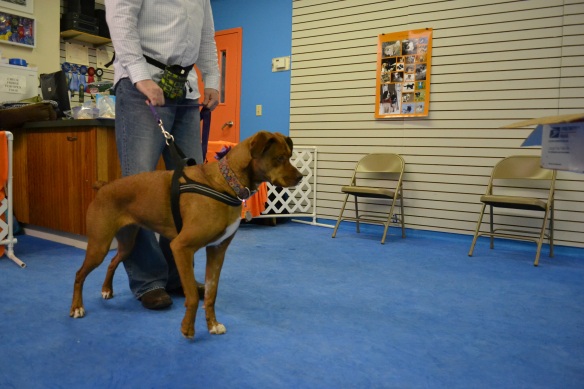 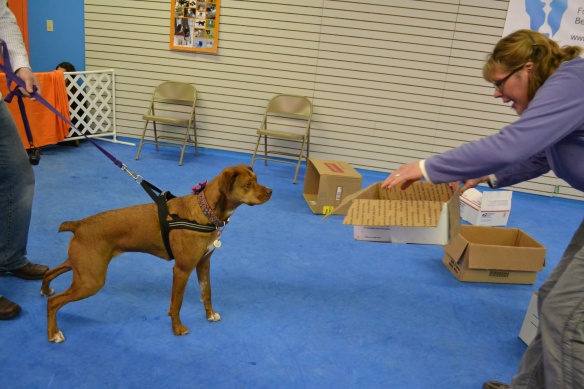 Then, the Mr. let her lead him around as she sniffed to find the box with the treat in it. It’s important to use high value, stinky treats in this class. Nola had a combination of chicken and hotdogs to find. 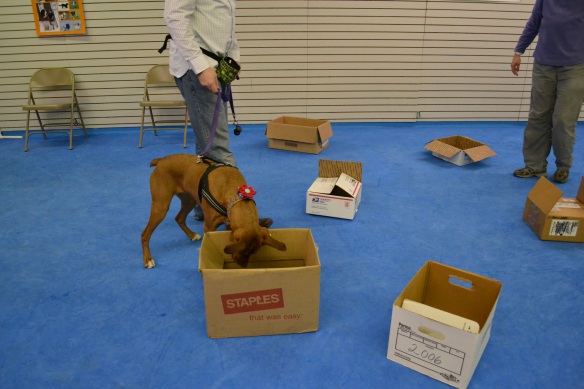 Once Nola found the box with the treat we were supposed to ‘jackpot’ reward her by throwing another handful of treats in the box and praising her like she had just become the first dog President of the United States. Nola was a pro at this round!

The second round got a little harder. This time, Nola was still allowed to see Teri put the treat in the box, but now there were even more empty boxes added to the mix. She was also allowed to search off leash on her own this time. Nola still did excellent, finding the box with the treat almost right away. 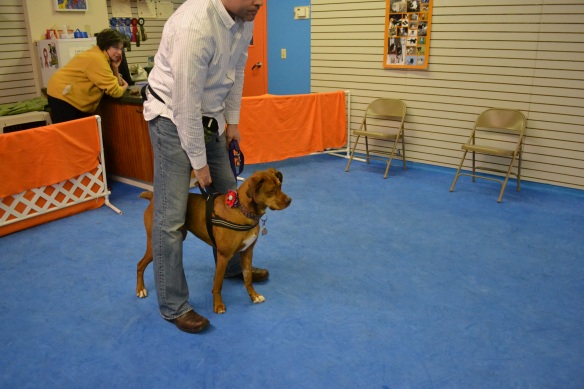 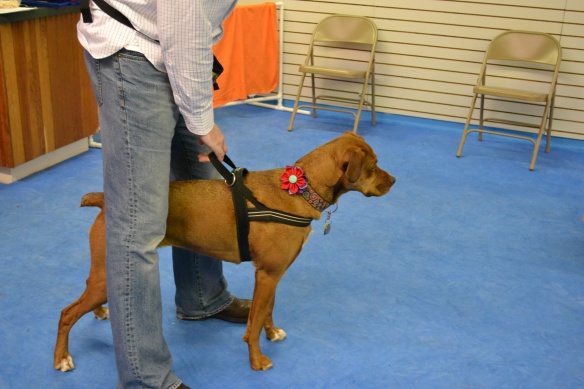 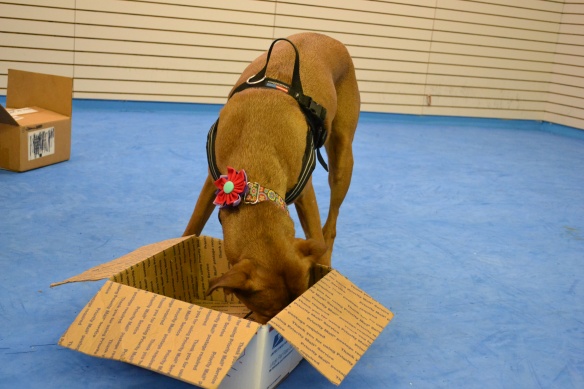 The third round was the ‘blind’ hide. Nola went behind a barrier as Teri hid the treat in a box. Then, she was allowed to search off leash for the box. Nola had a harder time with this one. She wanted to go to Teri and give her the ‘do you have something for me?’ look. We had to tap the boxes a bit to get her back on track. By the last turn she was doing great! 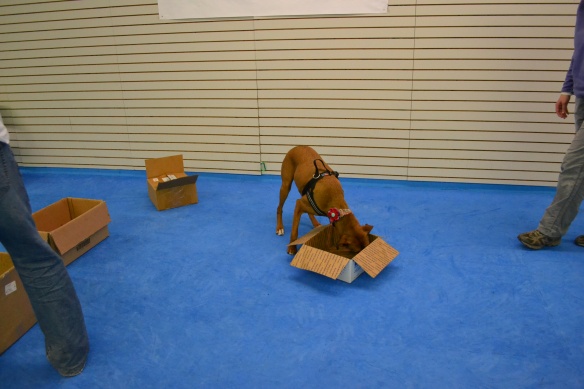 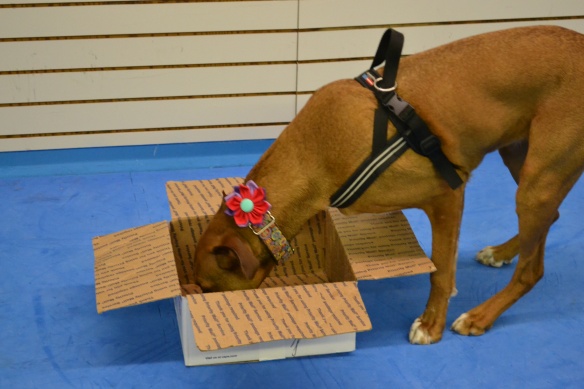 Overall the class was really fun. Nola seemed to enjoy it, and came home pretty tired. There were five other dogs there, and one of them, a sweet older lady named Birdie, just so happens to be owned by one of my blog idols- Jessica from Notes from a Dog Walker and the creator of DINOS (Dogs in Need of Space). Although I was a bit to self-conscious/paranoid/embarrassed by Nola making a scene in her crate/star struck to actually introduce myself to Jessica (insert palm to forehead!), it was nice to see Birdie go from having her tail tucked and very unsure of the boxes, to wagging and easily finding those delicious morsels Teri hid! (I promised myself that next time I will go over and introduce myself.) That’s the best part of this type of class, it is good for all sorts of dogs- shy dogs, old dogs, dogs that don’t like other dogs, young dogs, dogs that need more mental stimulation, etc. We hope Nola will like it even more next week!

12 thoughts on “The Nose Knows”