We love toys in our house. Stuffies, babies, educational toys, tuggers, balls, you name it we have it. We even have a special toy box for all of the dog toys. Nola has a ‘baby’ (it’s acutally a rabbit) she sleeps with that she doesn’t chew and we made sure that Laynie had one when she came to our house too (hers is a leopard but wasn’t so lucky and all the sqeakies got chewed out). Since Delaynie arrived in our house just about six weeks ago we haven’t really allowed many toys to be played with, other than the babies at bed time. Nola has a bit of a jealousy issue when it comes to Laynie playing with her toys. Or, she will grab a toy and tease Laynie with it by running away. We didn’t want to create any issues between the two dogs so we just avoided the issue all together.

We have always used the educational toys with Nola for mental stimulation when it’s too cold, rainy, or she is otherwise injured and can’t go outside and run. She is so smart that the tug-a-jug was no match for her. She figured out that if she picks the whole thing up in her mouth and drops it the bottom will break and all the treats come out on their own. She has even mastered the toy with the cups that hide the treats in them.The twist and treat she discovered works best when she rolls it down the stairs.

We weren’t sure how Delaynie would do with these mental toys, but since the kennel cough outbreak hit our house we needed something to keep her energy at bay. We started with the twist and treat. At first she didn’t really get the concept. She left the treats on the floor and brought it over to her bed to chew on the plastic.

In the end she just chewed a piece off the plastic and left all the treats. Nola would have thought this was an abomination. What dog leaves treats and doesn’t eat them?

We also tried the tug-a-jug. (This time I bought the bigger size which will hopefully withstand Nola’s smarts). She did well waiting until I told her ok.

But then, like with the twist and treat, she left the treats and just wanted to chew the plastic.

I think she liked this one better because she eventually figured out that if she stuck her tongue in the top of the bottle she could get the treats out. But really, she just wanted to chew it. 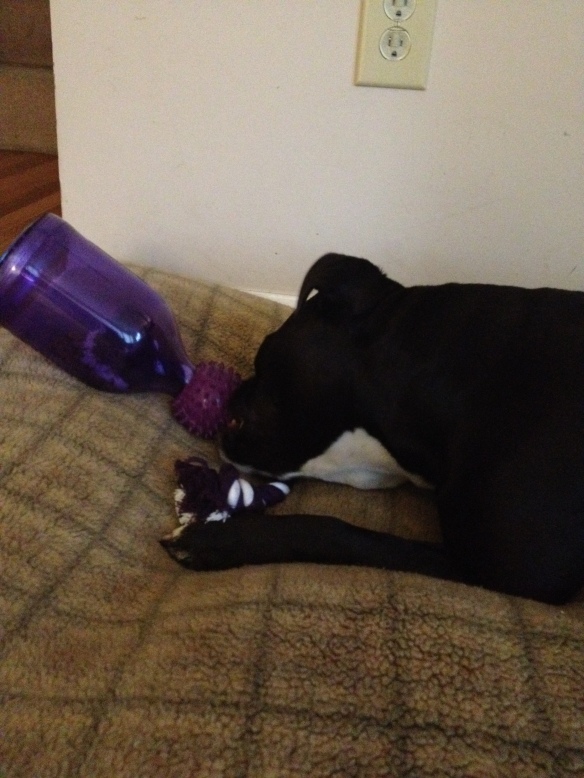 As far as toys go, with Delaynie it seems that if she can’t chew it, it’s not worth playing with, even if treats are involved!

If you’re interested in adopting Delaynie please fill out an application with BURN. If you would like more information about her, email me at: mrandmrsandnolakisses@gmail.com